A 40-year-old commercial bus driver has been arrested for defiling a 7-year old he calls his wife. the abuse which has been on for a while has now resulted in damaged bladder for the child, who now constantly urinates on herself.

The sad incident happened at a compound in Ilupeju PalmGroove area, Lagos State.
The victim always visited the suspect identified as Baba Michael, but unknown to many, Michael violated the child on every visit. 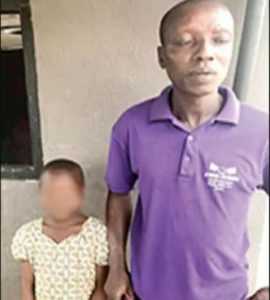 The abuse came to the open after the girl continuously urinated on herself during an examination in school.

Her school management who suspected sexual violation alerted Child Protection Network when the girl urinated on herself in class.
Mrs. Ka , who spoke to newsmen and was contacted by her daughter’s class teacher said;

“She urinated on herself in the class during exams. It was her classmate, sitting close to her, that first noticed her unusual behaviour. “When her teacher sent for me, she said she thought it was the exam anxiety that made her to urinate on her body. She allowed her to continue with her exams. But a few minutes later, she urinated again.

‘The teacher and headmaster asked me if she had been bedwetting before then, I told them it was long she stopped. It was then I knew something was terribly wrong with my daughter. I started weeping,” the mother said.

She explained that the headmaster further asked her the person that was fond of sending the victim on errands in their compound, but she couldn’t think of a single person. Lawal had always encouraged her children to be respectful and run errands for people older than them.’

“Before I got to her school, the management had invited Child Protection Network, a human rights group. After much interrogation, my daughter confessed that it was Baba Michael, our neighbour, who defiled her. Baba Michael just moved into our compound two months ago. He lives with his uncle and four-month- old baby.

‘It is my daughter that usually takes care of the little baby. She also used to run errands for the man. I didn’t know something like that was happening right under my nose. However, I noticed that the man usually calls all young girls in the compound his wife.”

After revealing her ordeal, the victim was taken to Mirabel Centre, at Lagos State University Teaching Hospital (LASUTH), where it was confirmed she had been defiled.

Comrade Toyin Okanlawon , The Child Protection Network Coordinator, confirmed that the suspect has been arrested.

“We were able to arrest the suspect through the support of his uncle. My advice to parents and guardians is to take good care of their children, especially the girl-child. They should prevent them from staying in isolated places.”

CRACO is an NGO that is committed to making the Child included and visible. We ensure that matters relating to children are not swept under the carpet but brought to the attention of the world, so that necessary actions can be taken to address such matters for the best interest of the the children. We keep you regularly informed of news and stories concerning children and women around the world.